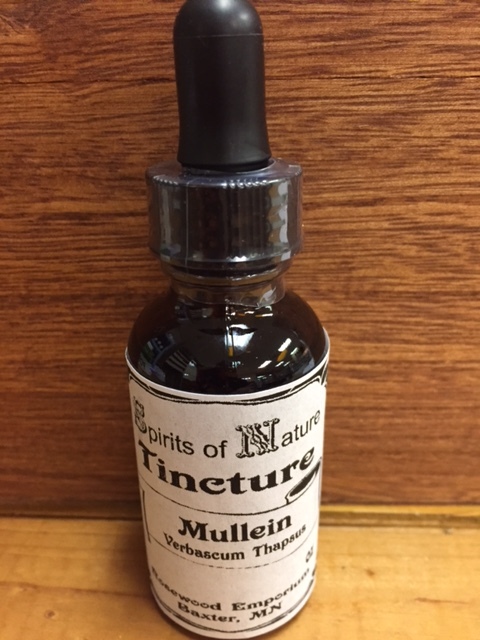 Respiratory problems and for stimulating the cough reflex, bronchitis, asthma, and croup, and it is a great herb to have around for cold and flu season and seasonal allergies. It has a mild sedative effect and is said to promote sleep and to soothe the nerves. Considered an antispasmodic, it helps to relieve stomach cramps, and as an astringent, antibacterial and antiseptic, it may be effective for urinary tract infection, as well as a fine mouthwash for a sore throat. Mullein extract can be added to a carrier oil, such as olive oil or sweet almond oil, and placed in the ears to soothe earaches and has been used to help heal ear infections, chronic bronchitis, emphysema, asthma, croup and other breathing difficulties, expectorant, to stimulate the cough reflex, sinus congestion, mildly sedative and is said to soothe the nerves and promote sleep. Ease breathing in the summer months when the ozone levels are high.

Boost the immune system and protect against disease and infection. If you have a toothache, the extract of Mullein may help to relieve the pain. It has also been found to be useful in treating mouth sores and as a gargle for a sore throat.

Due to its slightly narcotic properties, though non-addictive, it is one of nature's best painkillers. It is said to relieve the pain of headaches and migraines quite effectively. Mullein shows strong overall anti-inflammatory activity and has been considered to be effective in treating swellings, especially when lymph nodes in the throat, neck, arms, and groin swell or are congested. It has a reputation for cleansing the lymphatic system generally, and it is also frequently used to relieve swollen joints and muscle pain.

Contraindications: Pregnant or nursing women should not use Mullein, and people with a history of cancer should consult their physicians before taking this product. No serious side effects have been recorded for Mullein leaf. However, taking it in excess can result in stomach upset.

Clove, Cinnamon, Lemon, Rosemary and Eucalyptus essential oil blend. This blend is loaded with powerful germ killing agents. Eliminates 99.6% of airborne bacteria. You can win the battle against bacterial, fungal and viral germs. Truly a forceful and necessary component for every home or daycare facility. Compare our Robber's Blend to Thieves® Oil Blend.

Rosewood Emporium assumes no responsibility for improper use of this information. The statements about this essential oil blend have not been evaluated by the FDA. The FDA requires us to state: The information contained herein is not intended to diagnose, treat, prevent or cure any disease.

Elderberry fruit has been used for centuries in North America, Western Asia, Europe and North Africa. Medicinal benefits of Elderberry fruit extracts have been used to stimulate the immune system and protect against free radicals that attack healthy cells. In fact, certain studies have proven its effectiveness in helping in the fight against viruses such as herpes, AIDS, and HIV, or human immunodeficiency virus. Its antioxidant activity is found to be useful in lowering cholesterol, improving vision, heart health and for coughs, colds and other viral and bacterial infections and tonsillitis. People who have taken Elderberry fruit have reported less severe symptoms and have felt much better, much faster than those who did not. It was used in 1995, in Peru to stop a flu epidemic! So, at the first sign of a cold or virus, treat yourself to Elderberry. Some have stated that it has helped considerably to alleviate the symptoms, and within 72 hours. This herbal extract has also been used to help with headaches and migraines, rheumatism, gout, edema, hepatic disease, syphilis, epilepsy, toothache, asthma. Promote circulation, kidney function and good lymphatic system health. Since eating the berries doesn't give you the same concentrated benefits, it is more beneficial as an Elderberry fruit tincture.

Using Elderberry liquid extract every day will secure the body against the straining effects of the common cold. And it has been as a remedy for those diagnosed with type B influenza and has been found to be equally effective on type A influenza. Several studies have shown that an extract of Elderberry demonstrated efficacy in the treatment of both adults and children with either type A or B influenza, reducing both the severity and duration of flu symptoms in otherwise healthy subjects. This should not be considered a substitute for influenza vaccination in high-risk individuals.

An in vitro study also showed Elderberry's potential effectiveness against the H5N1 avian influenza virus. Elderberry is antiviral, antibiotic and antibacterial and has been used for centuries for soothing upper respiratory infections. It is an excellent remedy for asthma, bronchial infections, furunculosis, and sinusitis. Elderberry has long been used to treat coughs, common colds, sore throat and runny nose. As an expectorant, it reduces excessive mucus and expels phlegm. Taking Elderberry will also usually promote heavy perspiration and sweating; and following a soothing sleep, a fever may be lowered.

Effective in decreasing inflammation and preventing and repairing the destruction of joint tissue. Acute symptoms of gout are often caused by urate crystals, the uric acid that builds up and settles into hard lumps under the skin around the joints, leading to joint deformity and decreased the range of motion. These hard lumps, called tophi, may also develop in the kidneys and other internal organs, under the skin of the ear, or at the elbow. People with gout usually face a higher risk of developing kidney stones and kidney disease. Elderberry is a diuretic, this herb increases urine flow and promotes all fluid secretions, helping to cleanse the system. By promoting heavy sweating, Elderberry also opens the pores, and it aids the further elimination of toxic material and impurities from the body through the skin. Elderberry extract is also good for circulation of the blood and may help to dispel rheumatism, as well as treat fractures and injuries from falls.

Elderberry tinctures can help to alleviate problems associated with the intestinal tract. It is soothing to the stomach and helps aid in digestion. At the same time kills bacterial infections, and other forms of infection within the body, including the intestinal tract. They also have a mild tonic action that may help to stop diarrhea.

Elderberry may have a direct effect on the spread and growth of cancerous tissues. In one study it was shown to inhibit the ability of tumors to grow their own blood vessels. Research (2009) suggests that berries may be among the most potent cancer-fighting fruits, with a particular emphasis on Elderberry, Blackberry, Red Raspberry, Strawberry, and Blueberry.

Elderberry extract is beneficial to the heart, by improving blood flow throughout the body. A rise in bad cholesterol levels has proven to be harmful to the heart and arterial system. Studies have proven that Elderberry fruit extract prevents the oxidation of LDL-the low-density lipids or bad cholesterol, preventing the onset of cardiovascular diseases, especially heart attacks and strokes. Elderberry was also found to have an extraordinary effect on reducing stress and helps to significantly shorten recovery time after physical exertion.

Several animal studies show that Elderberry extracts help to lower blood sugar and fat levels. They also possess significant antioxidant activity and may help to protect individuals with diabetes from the harmful effects of unstable free radicals that are formed as result of metabolic processes in the body. Elderberries have shown to possess insulin-like activity and may promote increased secretion of insulin from the pancreas. Elderberry may also help with other complications of diabetes, such as immune deficiencies.

Shower Steamers are all the rage! A simple way to add scent to your shower! Available in essential oils and fragrance oils.

Optional: Add a black mesh bag to extend the life of your shower steamers! Drop the steamer(s) into the bag and hang in the shower. When the overspray hits the steamer, it will release the scent!

**Loon's Call is an essential oil and fragrance oil blend.

Shop
FREE PRIORITY MAIL SHIPPING ON ALL ORDERS OVER $35.00
In-store pickup available Tuesday - Saturday from 11 am to 5 pm

As we do our part for the environment, we use recycled boxes, and packing materials whenever possible, therefore, your order may be shipped in a recycled box.
Have questions? We have answers! Click m.me/Rosewood.Emporium to send us a message and we will respond as soon as possible
*Note - We make our products in small batches, products you receive may differ from those pictured.
We attempt to keep common color themes but when making things like soaps and bath bombs colors will vary.