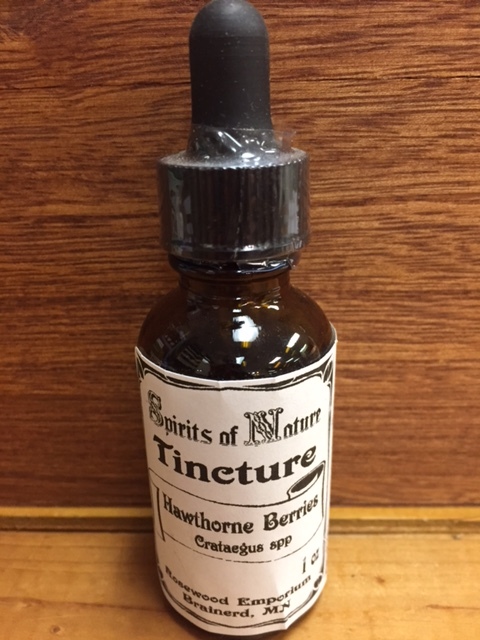 Diarrhea, female problems, and to heal wounds, cardiac tonic that has been used to lower blood pressure, reduce cholesterol and significantly enhance blood circulation to the heart and brain. It has also been used to strengthen the heart, in conditions such as angina, myocarditis (inflamed heart), and arrhythmia (irregular heartbeat). Arteriosclerosis, allergies, asthma, and sinusitis, irritable bowel syndrome (IBS), dysentery, and it eases some symptoms of Crohn's disease when used regularly. It also has been used to aid in resisting fluid retention in the body and to facilitate easy passage of kidney stones by helping to dissolve them. Menopausal women benefit particularly from Hawthorne Berries as they control palpitations and reduce the occurrences of night sweats. Its sedative properties are deployed for inducing sleep in those who are suffering from insomnia. Incidences of confusion can be controlled with the help of this liquid herbal extract.

Early stages of heart disease, promote the health of the circulatory system, it has been studied for treating angina, congestive heart failure, valve prolapse, myocarditis, arteriosclerosis and cardiac arrhythmia. The bioflavonoids found in Hawthorn interact with key enzymes in the heart to increase the pumping force of the heart muscle and may help to eliminate arrhythmia. It is believed to be especially effective in the beginning stages of heart disease, as well as speeding up the recovery time after a heart attack. The effects of Hawthorn Berry tincture is not immediate and can take up to 6 weeks to show any signs of improvement. A study in 2009 listed Hawthorn Berry extracts as an herbal remedy that worked as well as a leading high cholesterol medication.

Cholesterol lowering effects and reduce the accumulation of fatty plaque in the arteries, thus improving blood flow to the heart. It appears to increase the liver's conversion of LDLs (bad cholesterol) into HDL (good cholesterol) that do not clog arteries, which helps to stop plaque formation. Hawthorn tincture has been used for the treatment of spasms of the arteries (as with Reynaud's disease).

Studies suggest that Hawthorn Berry can be taken safely by people with hypertension who are also taking blood pressure medications. This herbal supplement is believed to reduce high blood pressure caused by hardening of the arteries and kidney disease. It has been shown to have the ability to both lower high blood pressure and to bring low blood pressure back to normal. Although it doesn't cure it, it may help to reduce the symptoms enough to stop the feeling of fainting when going from a seated to a standing position, sometimes associated with the condition.

Helps to strengthen tiny capillaries in the brain, opening them and resulting in more nutrients and oxygen reaching the brain. And in combination with Ginkgo, Hawthorn stimulates blood circulation to the brain, and herbalists have long used it to treat age-related forms of memory problems. It has also been used to improve capillary health and is known to relieve conditions such as bloodshot eyes and glaucoma.

Accelerate the death of leukemia cells and Burkitt's lymphoma and may also deactivate plasmin, a chemical that allows cancerous growths to spread throughout the body, can help to destroy free radicals in the body. Free radicals are naturally occurring molecules which cannot be avoided; however, their presence is increased by environmental pollutants such as cigarette smoke, air pollution, ultraviolet light, radiation and even some medications. Free radicals enter the body, destroy healthy cells and damage genetic material, increasing the likelihood of cancer and speeding the natural aging process.

May be of great help for arthritis and osteoporosis, stabilize the collagen in the bone itself, thereby helping to counter osteoporosis. Tone down inflammation, protect collagen, slow down the progression of a chronic inflammatory disease.

ADD (Attention Deficit Disorder) may be helped by the use of Hawthorn extract. By increasing blood circulation to the brain and stopping inflammatory responses caused by allergies, the herb is believed to have a sedative effect on the central nervous system. People who suffer from anxiety, strain, pressure, and tension may benefit from Hawthorn extract, because of its mild sedative properties. The sedative effect has also been shown to be helpful for insomnia and nervous disorders.

Stimulate the thyroid, which can lead to a faster metabolism as a secondary reaction. Hawthorn also reduces water retention and increases energy levels, allowing you to exercise more intensely and for longer periods of time.

Contraindications: Large amounts (more than the recommended dosage) of Hawthorne Berry may result in sedation or dramatic drop in blood pressure. Signs of overdose include hypotension and arrhythmias.

Using Hawthorn may potentiate the effects of some pharmaceutical heart medications - consult with your physician before using this product, as the medication dosage may need to be lowered.

Taking Hawthorn and medicines used to treat or prevent blood clots together may cause your blood to be too thin, making you bleed or bruise more easily.

Use with caution in cases of colitis and ulcers.

Although it is believed to be one of the safest herbal medicines, there are a few other known side effects, although rare. These include nausea, diarrhea, fatigue, excessive sweating, breathing difficulties, pounding heart, and usage should be stopped immediately and seek medical attention.

It may also interact with prescription drugs used for treating male sexual dysfunction.

This herbal extract may interact with muscle relaxants, narcotic painkillers, and drugs for anxiety, seizure and psychiatric conditions.

Children and pregnant or nursing women should not use Hawthorn Berry unless directed by a physician.

Add to Cart
FREE PRIORITY MAIL SHIPPING ON ALL ORDERS OVER $35.00
In-store pickup available Tuesday - Saturday from 11 am to 5 pm

As we do our part for the environment, we use recycled boxes, and packing materials whenever possible, therefore, your order may be shipped in a recycled box.
Have questions? We have answers! Click m.me/Rosewood.Emporium to send us a message and we will respond as soon as possible
*Note - We make our products in small batches, products you receive may differ from those pictured.
We attempt to keep common color themes but when making things like soaps and bath bombs colors will vary.