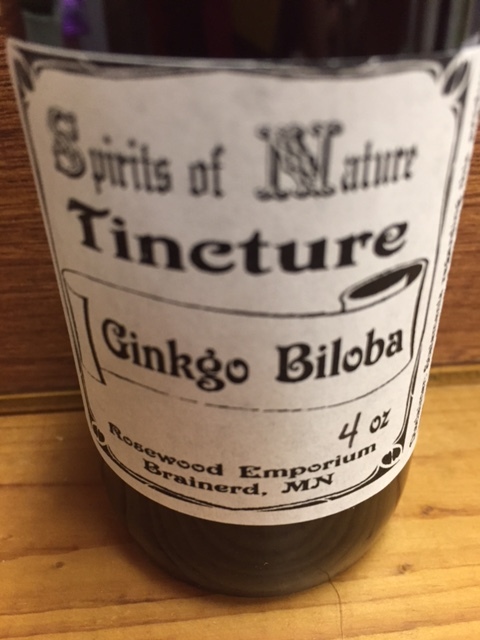 ﻿Guaranteed Mother Tincture
Instructions for use will be included with your purchase.

For memory loss and degenerative diseases of the brain and central nervous system, increase the circulation of blood and oxygen to all parts of the body, effective overall tonic that aids in the treatment of a variety of conditions, ranging from ringing in the ears to impotence. Premenstrual Syndrome (PMS), Seasonal Disorder (SAD), and depression may be reduced with regular consumption of Ginkgo Biloba extracts, macular degeneration, retinopathy, and glaucoma, frequent headaches, sinusitis, vertigo, Reynaud's disease and the shaking and loss of muscle coordination typical in Parkinson's disease.
Increasing circulation to the scalp and brain and for peripheral circulation of the blood, possible prevention and treatment for stroke patients, prevents blood clots from developing, and by increasing blood flow to the brain, may stop strokes from occurring, inhibits free-radical damage to brain cells after a stroke, reduce blood viscosity, increase vascular dilation may help to reduce retinal damage due to macular degeneration and may also reverse deafness caused by reduced blood flow.
Used to improve blood flow to the brain, which also helps to prevent strokes, cerebral arteriosclerosis and other diseases of peripheral circulation.
May reduce the risk of heart attack, may prevent the blood clots that cause them, severely irregular heartbeat. Taken orally, Ginkgo is known to have the properties that can help in improvement in symptoms of clogged arteries, like painful legs. This herb in conjunction with regular exercise and walking is something that is good for everyone.
Raynaud's disease is believed to be caused by blood vessels that overreact to the cold and then spasm, reducing blood flow and depriving the extremities oxygen, may help this condition by widening the small blood vessels. Effective in reducing short-term memory loss, increases blood flow to the brain and has been said to improve the transmission of nerve signals. Varying degrees of vascular insufficiency is sometimes the cause of mood changes or mood swings. The herb improves mood and has also been used effectively for depression, especially in the elderly.
Protect and promote memory and mental function, even with Alzheimer's disease which is marked by a major loss of nerve cells in the brain. Since doctors have found that antioxidants help to slow the destruction of nerves, it is not a far stretch to think that Ginkgo's antioxidant properties may help in this area. Studies have been made with geriatric patients that showed regular use of the leaf for at least eight weeks, measurably improves senile dementia. It has been shown to be beneficial for ADD, improvement of sociability, mood, anxiety and nervous tension.
Antioxidant effects in the central nervous system may also help to relieve certain symptoms of Multiple Sclerosis. Several East Coast (USA) university medical schools studied the effects of Ginkgo Biloba, and it appears that the patients using Ginkgo showed significantly more improvement in areas of depression, fatigue, attention span, memory, symptom severity, and functionality. These effects have also been used effectively for the complications of Parkinson's disease. The lack of dopamine is believed to be the reason there is progressive stiffness, shaking and loss of muscle coordination. Doctor's theorize that along with other treatments, Ginkgo biloba extract may help symptoms by increasing the brain's blood flow and thereby allow more of the depleted dopamine to be circulated to the areas that need it most. The research also showed that no adverse events or side effects were reported.
May also prevent free radical damage to the kidneys and liver and is sometimes used in treat kidney stones, kidney infections, and other urinary tract problems. Studies show that the toxic liver damage of acetaminophen, also commonly known as Tylenol®, is reduced through the antioxidant effects of Ginkgo.
Male impotence (erectile dysfunction) has been helped by the use of Ginkgo Biloba. Studies have shown that improved blood flow to the penis in men who had a narrowing of the arteries that supply blood to that area and were unable to achieve erections. And for women who suffered sexual difficulties when taking antidepressants have shown improvement after 6 months of use, claiming that it enhanced orgasm and excitement.
Helpful for those with poor leg circulation by enabling them to walk for longer distances without pain.
Benefit Vitiligo patients. This study showed that the herb has the ability to stop the progression of this skin disorder. Ginkgo is also said to fight melanoma by improving the delivery of oxygen to tissues throughout the body. The oxygenated blood creates a hostile environment for hormone-related malignancy.
Shown to help with weight loss. With the processed synthetic foods that are available these days are rich in unhealthy fats and toxins. With this type of diet, the body requires detoxification and needs better circulation for toxin removal. Ginkgo is known to increase blood circulation and the nutrients get better absorbed into the system. It makes the gastrointestinal muscles healthier and which is helpful for colon cleansing.
As an astringent, antifungal and antibacterial, it helps to ward off diphtheria, dysentery, hemorrhoids and toxic shock and treats incontinence and excessive urination. It is also useful in treating vaginal infection. Has also been shown to be beneficial for the respiratory tract. This herb is said to be helpful in cases of bronchial constriction, asthma, chesty coughs (with thick phlegm) and tuberculosis.
Nutrients: Amino acids, calcium, iron, magnesium, manganese, phosphorus, potassium, zinc, vitamins A, B1, B2, B3, B5, and C.
Drug interactions: Interacts with aspirin, Glimepiride, Glipizide, Heparin, Metformin, Repaglinide, Thiazide, diuretics, Ticlopidine, Trazadone, Warfarin. Supports interactions if on Paroxetine, Sertraline, Citalopram, Cyclosporine, Fluoxetine, Fluvoxamine, and Haloperidol.
Contraindications: If you are taking prescription MAO inhibitors (antidepressants) or blood thinners (aspirin, warfarin, etc.) speak with your doctor before taking Ginkgo.
And discuss its use before having surgery, if you are pregnant or if you take painkillers or anti-inflammatory medication or medication for swelling on a regular basis.
It is not recommended for epileptics.
Topical or internal use may cause skin irritations, mild headaches or mild upset stomach.
Instructions for use will be included with your purchase.

Disclaimer: We are REQUIRED by the FDA to tell you: The information presented here is intended for educational purposes only. These statements have not been evaluated by the FDA and are not intended to diagnose, cure, treat or prevent disease. Individual results may vary, and before using any supplements, it is always advisable to consult with your own healthcare provider.
Add to Cart