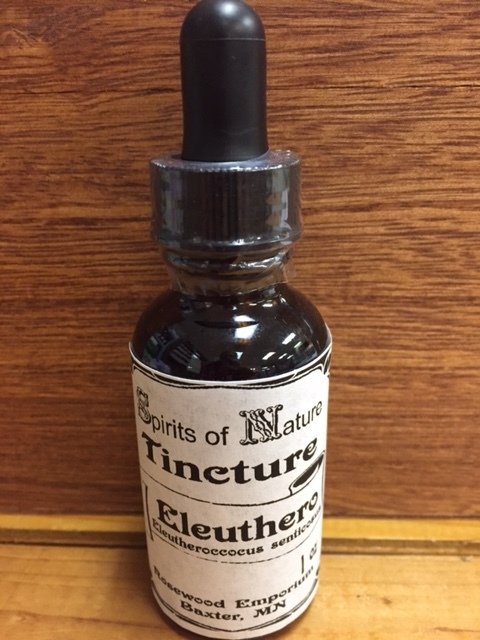 A relative of the more famous red ginseng, Eleuthero has been used in TCM since 190 A.D.

Prevent colds and other viral infections, reduce fatigue and build stamina while stimulating the immune system against the effects of stress, to support the body's resistance to infection during prolonged periods of physical and mental stress, and athletes use it to increase performance and endurance, favor its stamina-building benefits. Long used as a sedative, useful in combating depression, Attention Deficit Disorder (ADD), problems with concentration and environmental sensitivity.  In men, Eleuthero Root appears to stimulate the body's production of testosterone and thus may be helpful in fighting impotence.

Helps the body address stress, helps prevent adrenal burnout caused by ongoing physical or mental challenges, boosts memory, focus, and concentration without the letdown that comes from drinking coffee or other sources of caffeine. Has been used for mental and/or physical fatigue, curbs irritability, improves appetite, sleep and reflex action. The stress-fighting and depression-combating capacities have also made it useful in the treatment of Attention Deficit Disorder (ADD).

Restoring memory, concentration and mental clarity, which may be impaired by poor blood supply to the brain. Ease depression by directly balancing serotonin, dopamine, epinephrine and norepinephrine, the brain chemicals that determine mood.

Used for adrenals, blood pressure, hemorrhaging, hyperglycemia, impotence, and memory. For people undergoing chemotherapy and radiation treatments to help alleviate side effects. In human studies, the herb has been successfully used to treat bone marrow suppression caused by chemotherapy or radiation.

Increases the synthesis of interferon, a powerful chemical that boosts immune system activity, interfering with every stage of viral infection. Healthy people taking the tincture three times daily have shown increased numbers of the immune cells that have been decreased during HIV-infections and AIDS and is believed to fight against every viral infection known to man.

Combat respiratory infections and has been used to treat bronchitis and chronic lung ailments. It has been used in Traditional Chinese Medicine to treat rheumatic diseases and heart ailments. The herb has been employed to reduce cholesterol, blood pressure and restore cardiovascular health. May also be useful when the HPA (hypothalamic-pituitary-adrenal axis) is depleted, symptoms of which include fatigue, stress, neurasthenia and sore muscles associated with the hypofunction of the endocrine system. Chinese healers believe that Eleuthero Root is one of the best remedies for insomnia.

Russian athletes for consistent training, quicker reflexes, better stamina and increased energy. It is favored by many athletes, who maintain that it prevents them from getting sick and becoming run down through heavy training and will actually improve an athlete’s overall training, promote more consistent training, quicken reflexes and lower race times. Eleuthero is used to reduce “burn” after workouts. It is said to resist stress and during a stressful situation, the adrenal glands release corticosteroids and adrenaline, which initiate the “fight-or-flight” response. When these hormones are depleted, the body reaches an exhausted phase, but the herb delays the exhausted phase and allows a more efficient release of the hormones.

Contraindications: Men with prostate disorders should not use, as it contains compounds that may stimulate testosterone production.

Anyone taking digoxin (Lanoxicaps, Lanoxin) should seek the advice of a health-care professional before taking Eleuthero Root.

Patients with hypertension should not consume Siberian Ginseng. Rare side effects have been reported: Insomnia, drowsiness, nervousness, tachycardia, headache, hypoglycemia.

Hypoglycemics should use caution, as ginseng lowers blood sugar levels.

People with high blood pressure should consult their doctor before taking.

May cause light sleep in some people. Users are recommended not to take it in the evening.

Do not take if you have heart disease or high blood pressure.

Add to Cart
FREE PRIORITY MAIL SHIPPING ON ALL ORDERS OVER $35.00
In-store pickup available Tuesday - Saturday from 11 am to 5 pm
As we do our part for the environment, we use recycled boxes, and packing materials whenever possible, therefore, your order may be shipped in a recycled box.
Have questions? We have answers! Click m.me/Rosewood.Emporium to send us a message and we will respond as soon as possible
*Note - We make our products in small batches, products you receive may differ from those pictured.
We attempt to keep common color themes but when making things like soaps and bath bombs colors will vary.